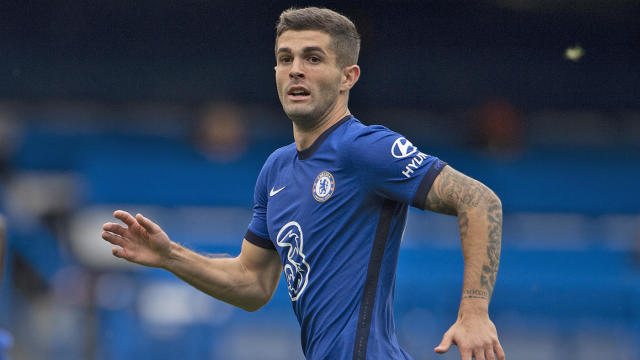 Tiger Fight, October 11th. Recently, the American star Pulisic, who played for Chelsea, accepted an exclusive interview with CBS Sport, in which he talked about the United States team and wearing the Blues No. 10 jersey.

"I suffered a very difficult injury before, and it is not easy to work hard to recover. I am very excited that I can get a chance to play before the international game day break, and now I look forward to the game as soon as possible."

"I am very happy to be able to make my debut this season, like a new beginning. New numbers, new seasons, and many new teammates. Generally speaking, I am very happy."

"We are ranked 17th out of 33 teams. Most of the teams are professional players. With me, I think we are doing pretty well. But it's mainly an experience. We all had a great time. "

"The first three are difficult to choose, of course I will include myself in it. Christian Roldan is also good, McKenney and Zimmerman can also play well, Jordan Morris is definitely to choose. You let I chose the top three, but the above are my top five."

"Yes, I will give myself this title. To be honest, it may be Roldan. He often surfs the Internet and is very good at playing games."

"It's exciting, I know it's a cliché, but it's true. There are so many players in the American team's starting lineup like today who play in major European clubs. I think this is unprecedented. This makes us I am also very excited to be able to continue to create chemical reactions in the national team and look forward to seeing what we can achieve together."

"Of course we will keep in touch often, and I am very familiar with them. I have played against McKennie, Taylor Adams and Sargent many times. I also keep in touch with them and often play games with each other. There is a close relationship, so when we go to the national team for training, everything seems normal. The more Americans playing in Europe can enter the national team, the better, and there will be a chemical reaction between us."

"He still needs to continue to improve himself. Both he and Dortmund have had a good start. We also want to see what he can do. I am very excited to have him in the national team."

"I think yes, the sky is his limit, and his future is bright. But as I said, he needs to continue to improve, but his talent is visible to the naked eye at the moment, and we are all very excited about this."

"The first year will be very difficult, but it is very important to have a firm goal in your mind. Moving towards the goal, this is how I coped with it in the first place, setting goals for myself, it will help you through the difficult days."

"There are many ups and downs. Under the influence of the epidemic, everything is difficult to describe. It seems that many things are constantly changing. Recovering from injuries, I feel like I have a new start. Last season we ended very well. , So I am very proud of my performance last season."

"I think I have also learned a lot. From the beginning of the season, when I didn’t have many opportunities, to sporadic appearances, to finding my place in the team, I think I have improved a lot. So I feel about my current position in the club. Very happy."

"This year we signed some more experienced players, and we also have a lot of good young players, so I think this kind of mix is ​​great. Last year was more of a transitional year because we couldn’t sign in, but it’s good The aspect is that many young players have gotten the chance to compete. And this year our confidence has become stronger. We are ready to compete and we also hope to win the championship."

"Historically, Chelsea is a club that is aspiring to compete for the title. Our goal is to reach the top of the Premier League and win every possible championship, including the Champions League. We have a lot of good players, and we will work hard to compete. Everyone is hungry for the championship."

"Of course, why not? That is our goal. I think this is also realistic, and we will work hard for it."

"No, I don't think No. 10 will bring me extra pressure. I have worn No. 10 for a long time in the national team. I don't think too much about this, especially when playing football. It's nothing more than It’s just a number on my jersey. Of course I hope to perform well, but I will put pressure on myself for other reasons. The jersey number will not put pressure on me."

"I don't think I have only one thing I want to achieve, but more about becoming a leader and a person who is admired. I want to open a way for all Americans, and they will say:'You know what? Licic did this, and I can do it too.'"

"Of course it is a combination of the two. What is very important for Americans is that they can not only go to Europe to play, but also play for the big European clubs. Of course it also means winning honor, which is what we hope to achieve. ."

"Of course I have confidence, and I think our whole team is confident. We want to enter the finals and go as far as possible. The chemical reaction between the players is very important. Find the best integration for everyone. Way. I think with this group of players, we will surprise people."

"What I want to say is, don't tout anyone like you did in the past. Our lineup is really good, but I want to tell people to be patient and let us run in for a while. When the game comes, we will do our best. A group of motivated young players, we really want to succeed, and we are very excited about it."